Posted by Judi Gray on September 28, 2013
After purchasing a camper trailer just before winter, we set off on our maiden voyage to Sundown National Park for two days to test it out and also with the hope of seeing a platypus in the wild and I had high hopes of viewing stunning wildflowers and orchids. 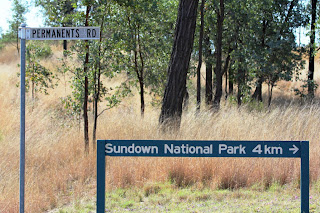 Sundown National Park is located on the Qld/NSW border in between Ballandean and Texas on the Severn River.  The entrance to the park only has the one sign as shown above and as there are many camping areas at the park, at first I wasn't convinced we were entering at the right gate.  It seems you are entering a private cattle property, however after a few kilometers drive though this dusty track, further signs to the National Park appear and the main park entrance is evident.

We stayed at the Broadwater Campgrounds during our stay which has many sites of different sizes suitable for caravans, camper trailers and tents.  We pre-booked site #1 right at the end of the park, thinking we were clever choosing the end spot to avoid other vehicles driving past and stirring up dust everywhere...which turned out to be a funny surprise on arriving at out booked campsite and finding that in the middle of the designated fenced site was a massive tree stump!!  What could you do but laugh!!  Fortunately our camper fitted in between the stump and the fence and it didn't cause any problems, although it was a little strange.

Along with platypus, Sundown National Park is known for an abundant array of bird species - all of which were on vacation when we visited.  The park itself was very dry and dusty woodland scrub and the Severn river was only about 60m walk from the campsite and was a wide beautiful river at the base of the mountains, surrounded by plenty of lomandra grasses and bottle brush trees and perfect for swimming and kayaking in.

During our two night stay we only did one of the bush walks which was the one to the Permanent Waterhole which was a 2km return walk.  We did this twice, once during the middle of the day and the second time at just before dawn to sit and wait for the platypus to show itself.


The walk to the Permanent Waterhole, while hot and dry was definitely worth it, although after waiting for hours before and during dusk, perched quietly up on the high rocks on the side of the waterhole, the platypus failed to show itself to us.  We did however hear of other campers who had seen the platypus in the waterhole at 5.30am in the morning - so sun-up is obviously the better time for a sighting rather than sundown... better luck next time we hope!!


All in all the birding was rather disappointing really.  We had hopes of seeing the common Spotted Bowerbirds, red-capped robins, spiny-cheeked honeyeaters and striped honeyeaters that are known to live at Sundown.

The Bird list for the 2 1/2 days at Sundown National Park is as follows:


Wildflowers - we had missed the flowering of the lomandras and many grasses had the dead flowers still attached and we were obviously too early for other natives as I noticed many grasses and ground herbs with buds.  I did find one beautiful tiny purple wildflower/grass and a couple of other tiny flowers also growing amongst the rocks in the dry areas of the river bed.  I will add a separate post for the flower pics here.


All in all, despite the lack of bird & platypus sightings, the camping experience at Sundown National Park was a good one and it was a great first run of the camper-trailer.  The park is neat and tidy and has pit toilet and donkey-shower facilities and each campsite has a small bbq plate/fireplace which was very handy.  Ample national park maps and brochures on hand and easy walking distance & easy accessibility for kayaks and swimming at the broad Severn River.  The days were warm, while the early morning were a touch cool as you would expect with Stanthorpe weather.  The ample tiger-pear prickles we could have done without!!

We are looking forward to the next camping and bush walking adventure and are pleased to be able to tick off Sundown as one we have visited in our list of South East Queensland National Parks.