I was phoned just after lunch time by a local vet to say that a local Crows Nest resident had rung them saying they had found a sugar glider and wanted to know what to do with it.  After receiving the phone number of the resident, we spoke to them to find out more, and it was reported that they had found the glider early that morning on the ground and had taken it home.  The resident wasn't able to drop the glider into a local carer until later that afternoon, and on hearing how long the glider had been with the resident, I volunteered to go and pick it up, worrying that it would be dehydrated and cold and possibly injured requiring urgent medical treatment.

On arrival at the property which was very close to the Bullockys Rest bushland park area in Crows Nest, I was amazed to discover that the "Sugar Glider" was in fact a rarely seen Feathertail Glider!!  The lovely gentleman who had rescued it, found it on the ground on his early morning walk, saying that he had almost accidentally stepped on it. He reported that he noticed that an old nesting box was in a tree just above where he found the little glider.  He picked it up and put it in his shirt pocket and that is where it stayed until I arrived.

I found the feathertail glider to be an older juvenile, whose tail was not yet completely "feathered" and without any obvious external injuries.  The glider was cold and I immediately transferred it into a flannelette pouch and placed that pouch into another heated padded pouch and administered fluids to it, that I had taken with me.  The glider lapped up the drops of sugar-water while in the car and I then went on my way to take it to a local expert wildlife carer. (see video below)

The glider was found not to have any injuries and it is thought that possibly the nest was disturbed and it was flicked out somehow onto the ground.  It made a full recovery with a local expert glider carer and was released back into the bushland where it came from some weeks later.

I just had to share the photos of the cutest animal I have ever had the pleasure of rescuing as a wildlife rescue volunteer over the years.  Photos and video taken on my phone. 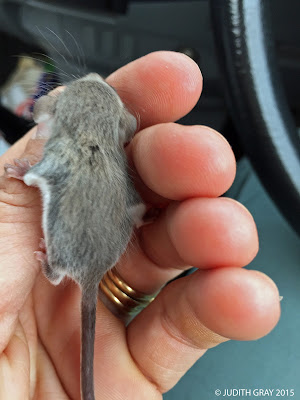