Posted by Judi Gray on September 17, 2017
It has been four years since our last visit to the historic town of Richmond at the base of the Blue Mountains on the beautiful Hawkesbury River.  Sadly both visits have been rushed and un-planned to attend funerals for beloved family members. This visit was planned to be just for one night, fly down to Sydney from Brisbane, drive to Richmond, attend funeral, visit family and return the next day.  We flew light and didn't take much with us, but I wanted to include my camera, but only took the small lens and medium sized ones for weight reasons. I had hoped that I would get the chance to spot the beautiful (although introduced) Red-Whiskered Bulbul's (Pycnonotus jocosus) again, as I did, by chance, during our last visit in 2013 (see here). 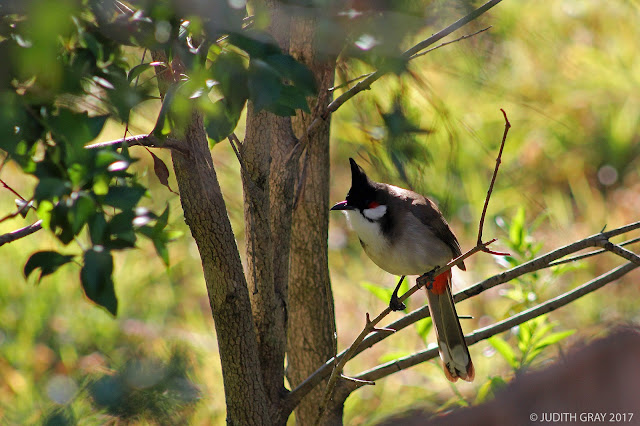 Well nothing went to plan and our flight to Sydney was delayed four hours, making us late for the funeral and not leaving any spare time at all to walk around Richmond as I had hoped. The following morning we were awakened at 6.30am by a text to say that our flight out from Sydney had been cancelled due to poor weather conditions!  Coffee time it was, so I took my motel room coffee out onto the landing of the motel in the sunshine to start the long process of phoning Tiger airways and to contemplate what we were going to do.  While sitting in the sun trying not to be blown away by the wind - I heard the most beautiful bird sound, one that wasn't familiar to me, and as I turned to look, there in the garden of the motel was the Red-Whiskered Bulbul's that I had been hoping to see during our visit!  I raced into the room to grab the camera from my bag - hoping to get a few photos. These beautiful birds were darting to the top of the high timber fence and back from the neighbouring garden, I was looking straight into the sun and there was no way of moving to a different spot for a better photo without trespassing on the neighbouring house yard... so I took some photos and hoped for the best!  The birds didn't hang around long and there were about six that I counted.  As the wind increased even more they disappeared from the garden and out of view from the motel landing.  I couldn't quite believe my luck and took it as a good sign - with so much else that had gone wrong, it was a tiny bit of enjoyment in a time of stress and sorrow.

After my first sighting of these beautiful birds in 2013, and not knowing what they were, I was disappointed on returning home to look up their identify to find that they were native to Southern Asia and were introduced to Sydney in 1880.  After talking to other birders though and comments made on my then blog post - I found that they were quite sought-after for photographers and not as easy to find for birders, and that they weren't as destructive as some of the other introduced bird species like the Indian Mynah for exammple.   Bulbuls live in groups and feed on insects, flower buds and native and introduced fruits.  They are found in urban gardens, parks and along creeks.

"It has a pointed black crest, white cheeks, brown back, reddish under tail coverts and a long white-tipped tail. The red whisker mark, from which it gets its name, is located below the eye, but is not always easy to see. Both male and female birds are similar in plumage, while young birds are duller with a greyish-black crown."  (Source:  http://www.birdsinbackyards.net/species/Pycnonotus-jocosus)

There were quite a few small birds darting around in the neighbouring garden to the motel along with the Bulbuls, unfortunately the introduced species out-numbered the native ones.  There were some beautiful Fairy Wrens that I didn't manage to get a photo of, who were hiding away in thick bushes from the wind.  The Indian Mynah (Common Myna) and Common Blackbirds were aplenty, along with the House Sparrows sadly.

The Common Blackbird is another introduced bird brought to Melbourne in the 1850's, since then it expanded it's range as far north to Sydney and beyond to most parts of South-Eastern Australia and Tasmania!  We witnessed a female Common Blackbird (aka European Blackbird) taking nesting material from a palm tree in the motel garden, over the fence to her secluded and perfectly shaped "bowl nest" in the neighbouring garden.  She came to and from the nest and the male was looking on from a close-by roof.  The blackbird is easily identified and not mistakable with other native Australian birds, due to it's bright orange bill and orange eye ring. The female is duller brown, but also has the distinctive orange eye ring.

I had to photograph the Historic reception entrance of the New Inn Motel at Richmond where we stayed.  The original cottage is fully restored historic brick & noggin cottage which dates back to 1837 and was originally a public house in the early days of white settlement in Australia.

The motel which is a newer building located behind the reception cottage, was a "no frills", 90's decor with no on-line bookings room, but it was clean and the owner was friendly and helpful... and it had Red-whiskered Bulbuls in the garden -so big bonus!

Unfortunately time was limited and I didn't get to photograph any of the historic buildings in this town - of which there are plenty architectural wonders to enjoy.