It is currently winter in Australia and the weather this year has been particularly harsh with continued drought and low temperatures and frosts over the winter months.  I hadn't been for a look at Tom Volp Park, aka Meringandan Lake for a while and was surprised that there was any water in it at all with the absence of rain.  There was a small section of water left in the lake, and Pacific Black Ducks and Australian Wood Ducks were out on it, but the usual waterbirds that we normally see here have gone.  The surrounding reeds, grasses and weeds however were alive with little birds, darting in and out collecting fibres and ducking off into Bottle-Brush Trees to begin nesting.  There were quite a lot of Double-barred Finches (Taeniopygia bichenovii) for whom the remaining dry grassland habitat was perfect!  There were plenty of Suberb Blue Fairy Wrens as well.


Meringandan Lake is a dam that was constructed in the late 19th century to supply water to the steam trains that passed through Meringandan. Once the trains stopped, the lake was left for enjoyment of the community and for local wildlife to inhabit it. The surrounding parklands named Tom Volp Park was named after a long serving employee on the Crows Nest Shire Council.

I must note that on the western & northern sides of the lake, quite a lot of Eucalyptus tereticornis trees have come up since the last rains, and are growing spectacularly.  This will become a terrific koala habitat and food source, however there will be concerns about the large number of large dogs in surrounding properties, should koalas come to visit the park in years to come, but the lack of trees in the housing yards will hopefully keep all wildlife from being tempted to enter.

Council has installed a wide concrete walking track around most of the lake, that heads to the back of the park where the playground is, which makes walking around the lake much easier than years before having to meander through long grass, it is a shame though that  the picturesque view is ruined by huge dogs barking defensively in almost every back yard adjoining the park.  My advice to those wanting to go bird watching - go very quietly if possible to try and not stir up the dogs who then scare everything off, and do not enter the park from the southern side as the dogs there are particularly noisy and disruptive, although well contained.  There is now a nice covered picnic table at the front of the lake and amenities are still located at the back of the park near the playground and tennis court.

It would be really good if Meringandan locals would start a bush care group for the Meringandan Lake as it wouldn't take much to get some of the weeds removed and maintained, install new nesting boxes and plant a few more trees, especially now in the dry season when the whole area is more accessible. I wish that I was able to add extra parks onto my already expanding bush care volunteer list, but just can't at this time.  In the mean time I will keep dropping hints to others who live close by!

Bird List at Tom Volp Park - Meringandan Lake 23/07/18
and for the first time in a long time I didn't see an Indian Mynah while there!!  Fantastic! 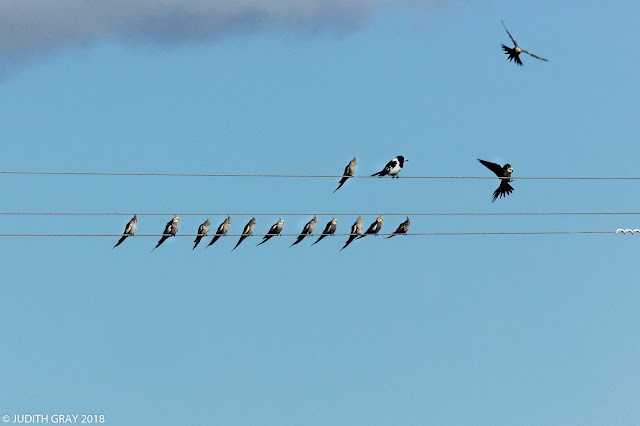