This blog post will be updated whenever we have another "Australia's Biggest Thing" to add to the list.  Its a quirky thing to do and something that we loved as kids of the 1980's and I am loving re-living it and its a great thing for tourism - especially for small towns!  I am trying to access photos from my childhood taken at the Big Pineapple, the Big Bottles, The Big Shell and The Big Cow to add to this blog post.  We loved visiting these things as children and I love that thanks to Instagram it is now once again a fun tick list. So here are our some of ours, and the list will grow.  Unfortunately we have been to quite a few places where we didn't get photos of the biggest things!!!

July 2015.  The new Big Prawn is easily accessible in the Bunnings carpark at Ballina and I think it was great that they created a new one after the uproar about the original one being demolished when the building it was on was put up for development. More info here...
I have a photo of the original Big Prawn at Ballina when it was on top of the fish shop... will add this later.

September 2015, located at the front of the Frog on Banana Fruit Shop at Innisfail, on the scenic drive south from Cairns to Mission Beach. I have read that in 2018 the fruit shop closed after loss of business from flooding, so I am unsure if the Big Frog on Banana remains. 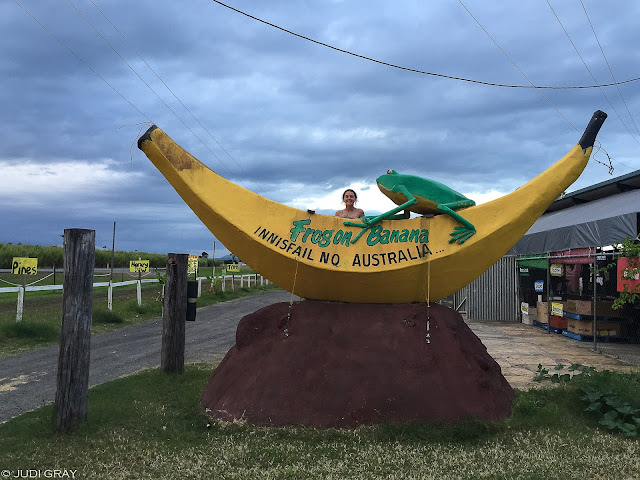 Originally made to stand outside the Captain Cook Motel in the 1972. The motel has since been demolished. Approval for this giant construction was approved by the Council, when one of its officers didn’t realise its dimensions had been given in metres, rather than imperial measurements.

There is a great photo of it in its original location before the motel was demoished here: https://www.captaincooksociety.com/home/detail/sheridan-st-cairns-queensland-australia


Another great photo from a visitor in 2015 here: http://bigthingsofoz.blogspot.com/2015/12/big-captain-cook-cairns.html


Since these photos in the links above, the site has been sold for re-development, hence it was surrounded by construction safety fencing when we visited in 2018 & 2019.

It may not be there for much longer and apparently the statue has been put up for sale with the James Cook University suitable interested in its purchase.


THE BIG MARLIN - CAIRNS
October 2019
My newest addition to our #australiasbigthings list.... another Cairns controversial one. The Big Marlin. The coastline from just south of Cairns to Cooktown in the north is known as the 'Marlin Coast' and this region has a reputation as the Marlin Capital of the World! The first 1000-pound Black Marlin ever caught was off the coast of Cairns apparently. 🤷🏻‍♀️ #thebigmarlin

The Big Macadamia Nut, is located to the left of the Big Pineapple at the Sunshine Plantation near Nambour is closed and in a state of decay. It was surrounded by construction safety fencing and could only be seen from a distance at the time of our visit to the area in January 2019.
Built in 1978 Six years after the Big Pineapple opened the owners built the Big Macadamia nut. Once part of the "Nut Country Tour", the building was eventually converted to the "Rainforest Creatures of the Night" display in 2000. The building has since closed, and remains unused as of June 2013. It was made famous for the visit of Prince Charles and Princess Diana who rode on the famous "nut mobile" in 1983 when they visited the Big Pineapple.

Who knows how long it will last for, as it seems to be a popular spot for urban explorers and vandals with many photos of its damaged interior shared on instagram by popular abandoned building photographers.  Such a shame to see the whole Sunshine Plantation in a very abandoned state.

The Big Shell was built in the 1960's with no one knowing the exact year apparently. It was a favourite place to visit on the Sunshine Coast when I was a child and I have memories of the pretty shell necklaces for sale inside. My daughter and I recently went for a drive-by to have a look if it was still standing and were excited to see it has been well looked after.