My search for a platypus is finally over 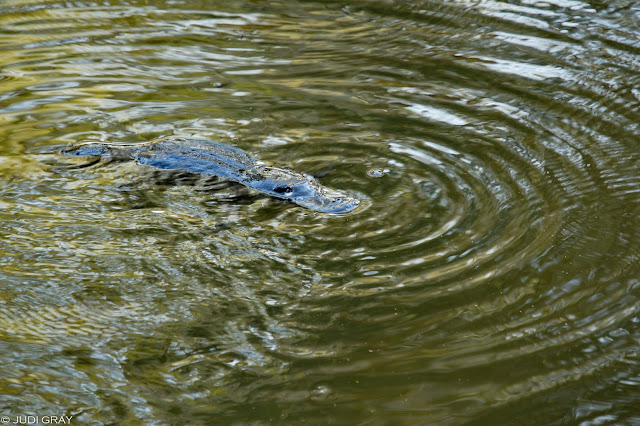 Some people dream of travelling overseas, expensive holidays & new cars, but for me, the top of my list (bucket list, if i dare to call it that) has been for as long as I can remember, to see a platypus in the wild. Some people may think that it is a simple wish, and when I’ve told people before- they can hardly believe that I have never seen one, yes me the wildlife warrior who spends most of my spare time with animals- researching, observing and caring for them,  and I am forced to listen to stories of city slickers who have no interest in wildlife or the natural environment, tell me their incredible chance sighting stories of all the times they have seen a platypus in the wild!


So why the platypus? I guess it probably all started a long time ago with my family tree research and readings of David Fleay’s work. Over many years I have collected all of his books and writings and read whatever I could in awe of his knowledge through research and experiences during his whole life. Of course David Fleay was the first person to breed the platypus in the wild and his work is still very relevant today- in fact in many Australian species. During reading about his experiences with the elusive platypus I become more and more interested in this rarely seen secretive species- so much so that over the last 9 years and since we purchased our camper trailer- our family camping trip locations have been chosen around whether or not there were possibility of  platypus sightings there!

Many many trips I arose early in the morning, wearing camouflaged colours and walked on foot to perch on the side of a creek bank, sometimes in freezing temperatures and keep watch out for any evidence or ripple in the water without a glimmer of a sighing. Often after spending hours looking silently - I would return to camp and hear stories from other campers how they had just seen a platypus! While frustrated I would always resign myself to the fact that it was wonderful that someone had at least seen them to know that they were still on the area and were surviving, although I did feel a tad jealous, especially when they passed the sighting off as a common thing that one sees!!! Not this one anyway!


Some of the locations I have visited in search of platypus often on various occasions, (where there are confirmed sightings) include from memory, Jenolan Caves, Paluma, Texas, Rathdowney, Goomburra, Main Range National Park, Queen Mary Falls, Sundown National Park, Yarraman, Murphy’s Creek, Ballard, Goondiwindi, Ravensbourne, Bald Creek Crows Nest, Crows Nest National Park, Cooyar, Coomera, Highfields, Geham, Pilton, Cullendore, and whole heap of places I can’t remember off the top of my head!  I have to say though that we have not made the effort to visit the two most well.known places to see platypus in the wild, being Canarvon Gorge in western qld and Eungella National Park near Mackay although both places are on our wish list to go to.

All this time,  I have been joined in this journey with my husband- and often our children as well- all equally keen to see one in the wild.  In September 2014 we spent our camping holiday at Rathdowney in south-east qld, I chose this spot as I have done the others- because of the reports of platypus sightings. Each morning and evening I spent time searching the water for any movement without success... then it happened.... Brendon went for a mid-afternoon kayak down the creek and while he was just sitting in the kayak- a platypus popped up next to him for a few seconds and then duck dived under the water not to be seen again. It was so quick that there was no time for a photo and on returning to camp, I think he was nervous to tell me knowing I would be happy but envious at the same time as he had gotten to experience seeing one without me.  It was truly wonderful as there hadn’t been a sighting there for a long time- I started to believe our bad luck was changing.

How wrong I was, as that was almost 5 years ago and we have many trips to platypus spots since then.  Year after year we continued to miss out on seeing platypus, all the while hearing about others sightings and recording them for my work as the President of Wildlife Qld Toowoomba Branch. I’ve researched locations and sightings and been given information from people who’ve never told anyone their stories as they have wanted to protect the platypus location to ensure its survival. Private property owners have told me fabulous stories of their observations and of also seeing baby platypus- of which I am just in awe.
Over the years many friends and family members have heard about my strong desire to see a platypus in the wild and because of this and my apparent voicing of my wishes, I finally got my chance this Easter on the Dumaresq River near Texas on a different private property to those we had been to before. On arrival the river just looked dreadful- it was so low and drought effected and simply consists of separate pockets of water and small rock pools within the vast width of the river bank. I did of course consider the fact that platypus was a possibility there- but honestly with the very little span of water and my terrible luck- I decided against getting up at sunrise to go for my usual walk. I did however wake up early and got up and got dressed and wandered off to the camp toilet, while there my brother in-law Chris, who organises our camping trips at Texas, had been up and out early to check his fishing lines and while doing so saw a platypus near the overhanging willow trees. He returned to camp and walked past our camper thinking we were asleep and he decided not to wake us!!! Fortunately he mentioned his sighting to our fellow camper and friend Matt who had seen me earlier that morning.  Matt waited for me to come back from the amenities to tell me about the sighting, knowing how many years I have been looking for one. I promptly turned off the gas which I had going to boil the kettle for my morning coffee and in haste grabbed my camera and off I went wearing my worn slippery crocs up the dusty river bank, though a barbed wire fence until I had good view of the water and the willow tree.  I sat on a perfectly placed log to look out over the water- praying, as I had done on many occasions before, that this time may be my time. I kept painfully still and quiet and it didn’t take long before in the distance  I spotted what looked almost like a little log appear in the water- surrounded by many ripples that were close together and then it disappeared  as quickly as it had appeared. I couldn’t believe my eyes. I decided not to take a photo or muck around with my camera for fear of not enjoying the much longed for moment, and the risk of missing it and the amazing memory just to take a picture. It wasn’t long and up again old man platypus appeared in another spot for a similar amount of time. This continued as he slowly would appear in closer vicinity  to where I was sitting. After about 3 times, I decided I would try and take a photo- when I did I soon realised the camera was on a delayed setting with 30 second shutter that I had set up for astro photography the night before/ so I frustratingly missed the shots!  I also realised at this time that in my haste to leave the camp, I had forgotten to grab my phone!! I quickly fixed the camera settings and took a few photos from the distance- although grainy being hand held in poor morning light- I knew it would be evidence enough!!  I felt frustrated forgetting my phone as I wanted desperately to call my family so they could come and see it- but was scared if I left to go get them and trek back to camp, that I would miss further sightings- so I made a decision to stay put. The platypus started to come close and closer down the river until it was right in front of me. It was then that I managed to get a couple of photos while cringing at the noise the camera shutter makes! I then switched the camera to video and struggled to hold it still with my big lens on to try and take some video for further evidence.


After I had taken a couple of photos that I thought would be reasonable - I decided to head back to camp as quickly as possible to get Brendon and the kids. I ran as fast as possible in crappy plastic crocs camping shoes and Brendon spotted me running towards the camp and yelled out “what are you running for?” Laughing at the same time as probably how awkward I looked ambling along the sheep track in crocs and with my big camera lens around my neck. I yelled out for them up come quickly all while trying to get the words out that I had seen a platypus- I think Brendon questioned what I was saying but at the same time I burst into tears of utter joy all while trying to repeat to Brendon and my son Cam to hurry up and come straight away! They instantly knew I was serious with my reaction and off we all went. I took them to the last spot I’d seen it but despite waiting for a long time we figured it was too late now in the morning with the sun well and truly up, and it must have gone back into hiding. Just as we started to walk back, I turned my head back and spotted him emerged near a branch in the water, he promptly duck dived under but before long appeared again in another spot and to my utter joy they were both able to see it. Brendon headed back to camp to get our daughter so she could see it also.
The next morning we all ventured back early to the same spot and sure enough, old man platypus appeared in exactly the same location and following the same feeding and fossicking pattern down the river.  It was the most wonderful experience ever and I feel truly blessed to finialy have witnessed this elusive creature in the wild.  I just hope that the waterholes do not dry up and that he can survive the dreadful drought.

I have compiled some of the video taken over the two  mornings below: